The idea for this parody was born out of a serious research project, funded by the Swiss National Sciences Foundation, on the implementation of the Convention for the Safeguarding of Intangible Cultural Heritage in Switzerland. (For access to results from this project, consult our university website.) Aware that academic publications and conferences reach a limited audience, we were looking for a more user-friendly way to present our reflections on the complexities behind this new international instrument.

Parody requires its audience to decide what it will take seriously and how. In order to function, it must stimulate viewer imagination and promote lateral or associative thinking. By paying close attention to the original’s characteristics and message, it thus encourages independence with respect to both the original and the parody. In this sense, while our intention is to amuse, we also intend to encourage critical thinking, not simple mockery.

It is important to state that despite appearances we hold UNESCO’s mission and institutional track record in high esteem. Part of the U.N. system, UNESCO was founded after two devastating world wars with the mission to “build peace in the minds of men and women” through the promotion of education, science and culture. These are noble and necessary goals. However, we believe they have been held hostage to member-states’ nationalist interests and imperatives in ways that not only limit but also fundamentally compromise the realization of these goals.

In the case of intangible cultural heritage, these compromises are striking. By promoting an ethnicized and nationalized conception of group identity, associated with innocence, marginality and consensus, the ICH framework accentuates difference at the price of connectivity. Moreover, it fails to interrogate the political and economic causes of the destruction of minority social formations. Banking secrecy and the global institutions promoting tax evasion are one of these causes. In our view, the best way to make this point succinctly and powerfully is through parody. 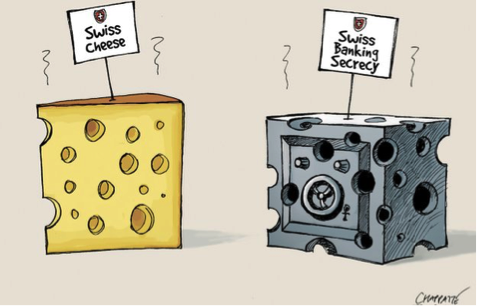 By the way, we are not the only ones to compare Swiss banking secrecy to tradition.
Courtesy of the Chapatte website, see http://www.globecartoon.com/dessin/.